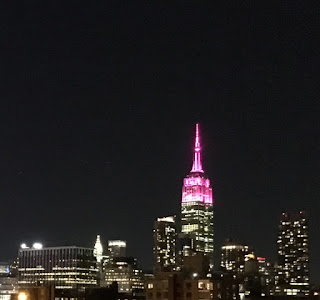 Here is a picture from my roof of the Empire State Building, with its pink lights in celebration of International Women's Day. To all my wonderful female students in Tsaile: A woman's place is wherever she wants to be!

Two weeks ago, I made the difficult decision to resign my appointment at Diné College, and I returned to New York City. While I miss my students, and the friends I made in Tsaile, Arizona, the college is an unpleasant place to work. My department chair was unqualified for her position, and the result was a dysfunctional department. Just before I left, the Faculty Association held a vote of "no confidence" in the administration (my chair was on that list), and it passed by an overwhelming margin.

As my husband and I drove home, reversing the cross-country trek undertaken in August to get me to the Navajo Reservation (we have crossed the country by car three times in all), I had time to reflect on what I will miss. For the first time in my life, I lived on a mountain, and in a hogan, a six-sided version of the traditional Navajo home. Tsaile is a fly-way, and nearly every morning in late summer and early fall, there were bluebirds on my bird feeder. Lately, there have been juncos and the ever-present, bright blue pinon jays. 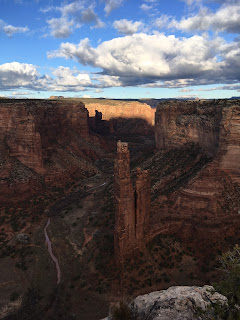 I will miss living in a culture where every mountain and prominent rock formation on Diné ancestral land is attached to a story, sometimes from the Diné Bahané or the Navajo Creation story. For instance, Spider Rock in Canyon de Chelley, is the dwelling place of Spider Woman, who sheltered the warrior twins during their quest to rid the people of the monsters who plagued them. As a Native New Yorker, these stories, the beauty of the land, and the sight of the Milky Way on clear nights, often served as my antidotes for the isolation of Tsaile where the nearest supermarket was 45 miles away.

On a lighter note, I miss my F-150, which now belongs to Anderson, a neighbor in Tsaile. For the uninitiated, this Ford is an iconic pick-up truck, and mine had great personality--so much that Anderson once motioned me over to the side of the road to ask if he could buy it because he had so long admired it! I never thought I would own a truck, much less yearn to be behind the wheel of mine again, but we are always altered by journeys, especially when we take a wrong turn! 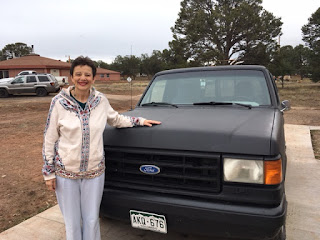 On our long drive cross-country, we stopped in Amarillo for Texas barbecue (which I always miss!). I will never forget the ladies at the UPS store in Amarillo who waited nearly a half-hour for us on a Saturday afternoon; because I had gotten sick with the flu on the second day of our journey, we were delayed in picking up the contact lenses I had shipped there.

Later that evening, on a lonely expanse of highway . . . 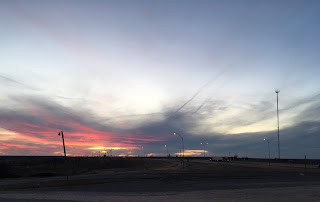 . . . we stopped for cough drops and Tylenol at a trailer park store. The next night, my husband took me to Mercy Hospital in Springfield, Missouri, with a temp of 102. When you walk into Mercy's ER, the first question they ask is: "How are you feeling?" In New York City, the first thing they ask in an ER is: "Do you have insurance?" My nurse was terrific, and the next morning, when I called for the results of my X-ray, I was immediately put through to the radiologist. I love my city, but nothing here works this well. Thank you, Mercy Hospital.

By the fourth day on the road, we were all exhausted . . . even our Road Warrior Cat, Lucia, who had lived with me in Tsaile. It was Lucia's third cross-country journey, the second in a Penske truck. Here she is nestled in between the seats of the truck's cab. 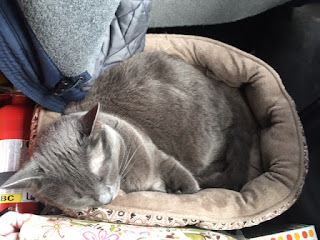 Our last night on the road, we stayed in a delightful B&B, the Somerset Country Inn in Somerset, Pennsylvania. The owners had attended President Trump's inauguration; we saw their security badges hanging on a nearby hook. We never spoke about politics. Instead, my husband and I, and the other two guests, all of us left-leaning Democrats, were introduced by our hosts to a neighbor's dog who visited the B&B each morning. We fussed over the dog a bit, ate a hearty breakfast and drank the best cup of coffee we had had all week. We complimented our hosts on their graciousness, too.

About two hours later, we pulled off the Interstate to get gas, and passed this sign: 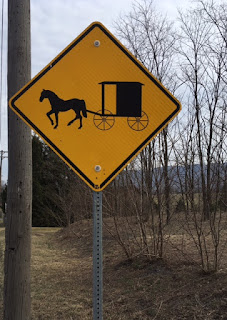 On our way back to the Interstate, we saw a horse-drawn buggy ahead of us and realized the need for the sign. The driver of the buggy was a member of a nearby Amish community. We slowed, and he pulled to the side of the two-lane road. I lowered my window to say "hello" and to thank him, and the young man waved and wished us a "good journey." Suddenly, I felt very hopeful for our country.

America has not yet realized the dream of "justice for all," but while we bandy opposing views and struggle to forge a better nation, we need to do it (especially now) with the great civility we were shown by a couple of Trump supporters and a young man who surrendered his right-of-way to two weary strangers.
Posted by Maria Garcia at 11:47 PM