In the Green Room with Sean Connery 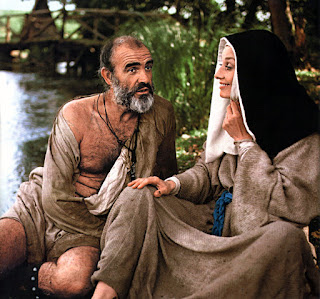 A still of Sean Connery as Robin Hood and Audrey Hepburn as Marian in Richard Lester's Robin and Marian (1976).
A few years after receiving my graduate degree in cinema studies, I was freelancing for a magazine that co-sponsored a prestigious award ceremony in New York City. (If I divulge the award, I will have to begin lying about my age.) Both staff and freelance writers were permitted to attend the event, although we were mostly seated in the nose-bleed section. No one complained of that the year Sean Connery was awarded “best actor.” The house was packed, despite a particularly nasty flu season.

I could barely see the stage from my seat, and was surprised when I spied my editor, in a stunning Chanel suit, rushing toward the back row. Robin was an irascible woman, but whip smart, and a thoughtful editor. She had presided over the ceremonies in various capacities over the years. Robin told me that the person she hired to manage the green room had called to say he had the flu. It was a half-hour before the start of the show, and she asked if I would help her manage it by taking his place. I knew nothing about running a green room, a theatrical term for the place performers wait to be called onto the stage.

I had a five-minute lesson on green room etiquette, after which Robin led me to the off-stage space. I was told that no one, not even the recipient of the “best director” award, was permitted to have more than one guest. Five minutes later, the "best director" arrived, accompanied by a six-person entourage. With a stare that she also used on writers who argued with her edits, Robin instructed five of his guests to proceed to their reserved seats. For the rest of the evening we worked together, catching snatches of the ceremony and leading award recipients onstage. I was glad I had worn low heels that evening.

Sean Connery and his wife Micheline entered the green room about 10 minutes before the event began, and many in the room stood up from their seats, as though royalty were in their midst. The couple seemed not to notice, or perhaps they were accustomed to it. Robin greeted them, introduced me, and then waited while they circled the room, speaking to other award recipients. It was obvious from Connery’s voice that he had a cold. After Robin settled them in a quiet corner of the room, I offered the actor a few cough drops that I had in my purse because I had recently recovered from a bout of the flu. He graciously accepted them, popped one in his mouth, and thanked me for noticing that he was “under the weather.”

Then he asked if something stronger could be had. “Scotch, gin or rye, Mr. Connery?” His reply: “You don’t have to ask me that, do you? ’Have a Glenfiddich?” I knew the barman was British, and told him there was a good chance of it. I asked if he liked his scotch “neat.” His retort: “Ah, lass, you will make some man a good wife.” Micheline elbowed him at that point, and winked at me. It was not a remark any American guy would have made in the 1980s, at least not within hearing distance of a woman.

An obvious inveiglement in Connery’s remark stopped my impulse to wince. Feminist or not, I figured few women could resist the man’s charm. I could not, especially when he asked what I thought of “the film,” the one for which he was receiving the award. It was not one of Connery’s best roles, but I remarked on a scene I thought was particularly good. I added that my favorite of his roles was Robin Hood in Robin and Marian (1976) where he co-starred with Audrey Hepburn. He smiled. “So you prefer an aging warrior to a secret agent?” he asked. “I do,” I replied.

Remembering his scotch order, I went to the bar. After I handed Connery his glass, he took a long sip of scotch. Then Robin walked over and tapped his shoulder; he gave the glass back to me in order to rise uneasily from the low slung chair. Arthritic knees, I thought, and the effects of his cold. “When we are born, we cry that we are come to this great stage of fools,” he said, reciting a line from “King Lear,” my favorite Shakespeare play. And I remembered Lear’s line from the same scene: “What, a prisoner? I am even the natural fool of Fortune.”

With an impish grin and a wink at me, Connery said, “Ah, girl, for sure we all are.” Then he and Micheline were gone. I slipped backstage to hear his acceptance speech, and Robin caught my arm. The board president had invited me to the cocktail hour to thank me for what I had done that evening, but I was glad to have the excuse that a friend was meeting me for a late supper. After trading lines with Sean Connery, a cocktail party seemed utterly mundane.
Posted by Maria Garcia at 9:52 AM