Six of 2013's Best Films Now on DVD or Streaming 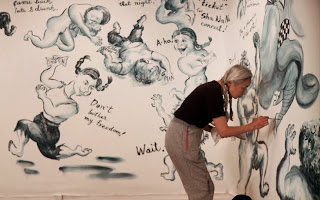 A still from the documentary "Cutie and the Boxer" (courtesy Weinstein Co.), which shows Noriko Shinohara completing one of her murals for an exhibition with her husband and fellow artist Ushio Shinohara.

Like most critics, I see excellent narrative films and documentaries every year which open for two weeks in New York or LA, as well as movies which never receive any theatrical distribution, and still others that are not picked up for DVD distribution or streaming—and we are all the worse for it. Some are human rights documentaries, but others are narrative films, often independently produced, which may have flopped at the box office—a fact no viewer should use as a measure of whether or not to screen it—and have difficulty getting a DVD distributor.

I think of Nagieb Khaja’s documentary My Afghanistan: Life in the Forbidden Zone, which did not get a theatrical distributor and is not available on DVD or streaming. It provides a remarkable portrait of that country. For long moments while screening it, I felt the grief of an Afghani child who cares for his younger siblings, and wonders whether he will ever be able to complete his education, and the mixed emotions of an American soldier who suddenly realizes that the people living in the village he is defending in Helmund Province do not care who wins the war. Some of them want to kill him, a few believe he may liberate them, but most just want him and the Islamic extremists to leave so that they can return to tending their goats, or harvesting the fruit from a beloved orchard. (For an interview with Khaja, use the link to the left under Feature Articles: “On Human Rights Watch.”)

With Khaja in mind, instead of compiling a “Ten Best” list this year, I hope you will consider my “Best Films of 2013 on DVD or Streaming.” Some of these six documentaries and narrative films suffer on the small screen, especially Alice Winocour’s Augustine and Pablo Larrain’s No (which is from last year’s list but opened in theaters in 2013). These filmmakers shot on 35 mm. film, and their aesthetic is more easily evinced on a theater screen, but their work is nevertheless worth seeing under any circumstances because of their unusual historical narratives, and the artists’ perspectives, both of which are a pleasant break from large-budget Hollywood standards on everybody’s “Best Ten” list.