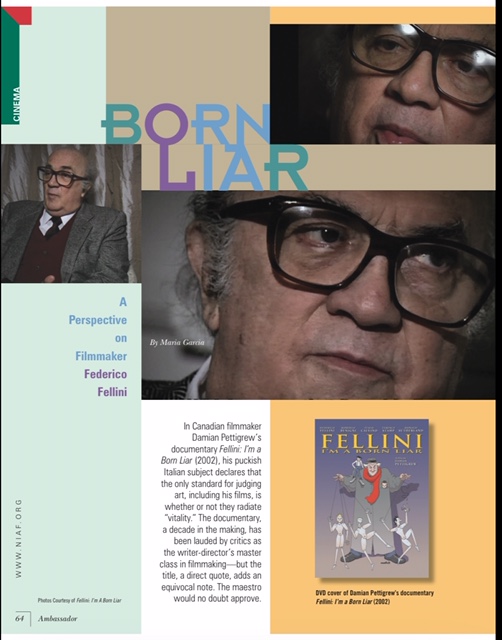 In my last two "Cinema" columns for Ambassador, instead of interviews with living filmmakers, I was compelled to write about film professionals who are dead, namely Federico Fellini and Ennio Morricone. This was a somewhat new endeavor for me. I have written two long-form pieces about my favorite actress, Anna Magnani, one a review of a retrospective of her work at the Film Society of Lincoln Center, and another in a year when there were so few Italian films released in the U.S., I could indulge myself by devoting a column to my favorite Magnani roles.

I occasionally write about recently released classics on Blu-ray, mostly for Cineaste, for instance my recent review of John Ford's The Last Hurrah (1958). I always enjoy revisiting Ford, one of America's great directors, and researching stories about the production, especially when I feel that the movie is under-appreciated as this movie undoubtedly is—who can resist a cast that stars Spencer Tracy, and includes such Ford regulars as Basil Rathbone, Jane Darwell, Donald Crisp and John Carradine?

With the Fellini and Morricone columns, my writing was focused on the work, the cinematic legacy, a comfortable circumstance for a film critic. With the 100th anniversary of Federico Fellini's birth this year, there was no way to avoid writing about him. His portrayal of women has always made his films problematic for me, and in revisiting his work in the course of my research, I found my opinion had not changed. Much of his oeuvre is dated, but the performances of his wife, closest collaborator and star, Giulietta Masina, are vibrant and worthy of more critical consideration than they have been afforded. Their collaboration gave me the "hook" for my piece. (It appears here: https://www.niaf.org/niaf_magazine/ambassador-magazine-vol-31-no-4-current-issue/)

With the Ennio Morricone column, which will appear in the upcoming Fall issue of Ambassador, the research was daunting, in part because of the length of the composer's career in film. I had the advantage of being able to read some newspaper articles in Italian, and that gave me anecdotes that did not appear in the American press, but it was necessary for me to conduct more database research than usual. While I consider myself well-informed on the subject of film music, I am not a musician. And, to write about the maestro, who was also a classical composer, I had to explain the reason his music was considered so innovative, without the benefit of a web-based platform. (Ambassador appears online but as a PDF.) In other words, I could not provide readers with musical or video clips.

I found myself rewriting the introductory paragraphs for two weeks before realizing that I needed some of the vocabulary of a music critic. Of course, I did more research, and that yielded an intriguing quote from Morricone in an interview published 25 years ago, in which he said that he began each of his compositions with "a brick from Bach." As a passionate early music "fan," I listen to Bach often, and started speculating about the nature of the maestro's "brick" in Bugsy (1991) and Cinema Paradiso (1994), two of my favorite Morricone scores.

I was not exactly "off and running" after that—Red Smith was not exaggerating when he said that writing is an endeavor in which you "open a vein and bleed"—but I had the structure for my 1300-word article. In retrospect, I found a way to comment on the life of two iconic figures with some biographical research, although in the end mainly through their work. One of the benefits of being a film critic is that the research, in addition to reading interviews and reviews (and sometimes the more painful task of rereading your own published pieces), entails screening the work of talented filmmakers like Giuseppe Tornatore and Barry Levinson.