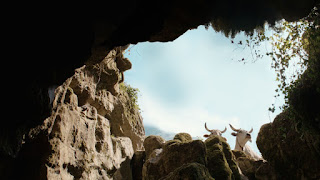 For the press, the New York Film Festival began on September 20th. It opened to the public this weekend. My first festival review, the "Currents" documentary Prism, was just posted on Awards Watch. (The link is on the left, under "Recent and Selected Film Reviews.") Like all journalists who attend festivals, I find it stressful to balance the films I want to screen, and carving out time to write and file assignments. The upsides this year are the in-person screenings, and catching up with colleagues, after a year of watching movies on a computer screen.

The image above is a still from one of my favorite films at this year's festival, Michelangelo Frammartino's il Buco or The Hole (https://www.filmlinc.org/nyff2021/films/il-buco/). It is ostensibly about the exploration of underground caves. One of my friends and a fellow critic once said that watching the Italian filmmaker's work, one could walk away from the screen, hard boil an egg, and go back to it, knowing you have not missed anything. Maybe Frammartino's work is slow but it is also exacting and subtle. He is a master at composition, too. This one is about the upper world where time moves on, people die and cows calf, and the underworld that has not changed since the beginning of time. The film is scheduled for theatrical release in 2022.