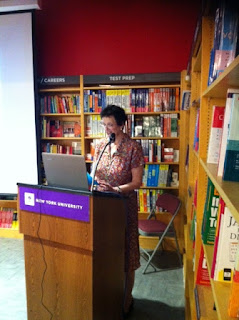 I hope you will take a look at clips of my recent presentation on Jonathan Demme's "The Silence of the Lambs" at NYU Bookstore: https://www.youtube.com/watch?v=HEnhvA10x7k&feature=em-upload_owner

Also, snippets of the question and answer session are here: https://www.youtube.com/watch?v=spEWFMU8h38&feature=em-upload_owner
Posted by Maria Garcia at 9:12 AM


In Stig Björkman’s Ingrid Bergman in Her Own Words, which will screen at The New York Film Festival, an archivist observes that the radiant star of so many memorable films saved her photographs and “home” movies, as well as her school assignments, and her children’s school papers, because early in her life she had learned the value of such mementos. Orphaned as a young adult, Bergman went to live with relatives who died three months after her arrival.

Ingrid Bergman in Her Own Words is organized chronologically, moving from the actress's girlhood to her early work in Swedish theater, to her triumph in Hollywood, which began when Bergman was brought to the U.S. by David O. Selznick to make Intermezzo (1939). After working with Victor Fleming and Alfred Hitchcock, she went to Italy to realize her dream of working with Roberto Rossellini. Her affair with the director resulted in a swift and stinging rejection by the American public.

At first puzzled and then deeply wounded by this sudden withdrawal of admiration, Bergman would not return to Hollywood until 1956 when she appeared in Anatole Litvak’s Anastasia. Her final theatrical film, before her death from cancer, is also discussed in the documentary. It marked Bergman's return to Sweden to appear in Ingmar Bergman’s Autumn Sonata (1978).