My Filmmaker Interview for "The Janes" 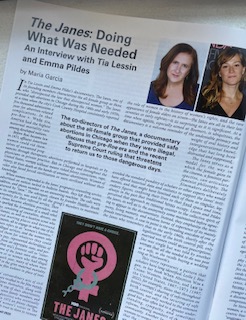 My interview with documentary filmmakers Tia Lessin and Emma Pildes for The Janes appeared in the Fall 2022 issue of Cineaste. The documentary recounts the story of the eponymous radical feminist group that provided free abortions before the passage of Roe v. Wade. Below is a brief excerpt from the feature:

Cineaste: All of the Janes and your other subjects appear in informal settings, even thepolice officer who arrested the Janes, and Mike, the abortionist. You filmed a lot of the Janesat home, and screening the film I felt like I was sitting in on a living room conversation.Would you comment on your stylistic choices?

Pildes: For this documentary, that setting felt right because these women are testifying towhat the country looked like the last time women did not have a right to choose. Theseare very intimate conversations and they are personal. They’re funny and warm, andalmost take a page from this “grassroots-ness” of the abortion counseling itself. The Janesshared each other’s cars and each other’s homes for “The Front” or for “The Place,” thelocations where they met their clients and where the abortions were performed. It just feltappropriate for these stories. That is the film Tia and I wanted to make. We did not useexperts in this documentary. We were doing first-person perspective. We knew that wasthe “lightning in the bottle” of this particular story, the Janes being able to tell this talefree of male experts and statistics. That is all implicit. We were doing this encapsulated,historical story and it does not take much to connect the dots with what is happeningtoday. We wanted the feeling that we were having a conversation; we felt that was theincredible power of their testimony.

Lessin: Emma uses the term “conversation.” Of course, we came prepared with questions,but hopefully it is more like a conversation than an interview. The film takes its twists andturns and there are surprises along the way. I have never used Errol Morris’s Interrotronmachine. I prefer that personal connection that was made harder because of COVID. Halfof the interviews were completed before COVID, but there were at least nine or ten thatwe did after the vaccines, although still during the pandemic. We could not be as close tothe subjects as we would have wanted.

Cineaste: I was reminded of a moment during the interview with Mike, the abortionist,when, referring to his skill, you said, “And you were good at it.” He replied, “Yes, I was.” Itwas conversational and intimate, and it gave him a chance to brag about the small part heplayed. I suddenly understood his history and his personality.

Lessin: He was a complicated character. Mike was not apologizing. He felt good aboutwhat he had done. Both Emma and I feel some affection for him even though were alsoother feelings because he’s a tricky guy. He did good, but of course not for the reasonsthat the Janes were doing it. We could have made a whole film about Mike. We had to bejudicious and efficient because the film was not about Mike, yet he was a very interestingand colorful character.